I love to swap blocks, fabric strips, fat quarters or whatever is involved with quilt things.

I have been quilting for many many moons, (yikes - since 1978) and have been participating in block or fabric swaps since around 1983 when I first swapped 3" x 6" Flying Geese blocks.  OK, these weren't the fancy dancy "4 at a time" or "no waste" flying geese'.  These flying geese blocks were made the old fashioned way, where we cut (with real scissors) real triangles, then sewed those bias edges together. No rotary cutters at that time!  Yeah, I am an 'old lady' and was quilting in the 'dark ages'.

Two HST (half square triangles)  sewn together to make a flying geese. Ahhh, the good 'ole days. Still a flying geese block, but there are a lot of easier ways to do it these days. The Center part is usually referred to as the 'goose' and the outer triangles the 'sky'.  MORE on Quilty definitions

Back in the early 1980's, each month at our quilt guild (Green Country Quilters Guild), we would bring however many flying geese we wanted, and just swapped with other members before the business meeting started. I think the only requirement was that they measure 3.5" x 6.5" unfinished size.  No rules, and no quilt police. I ended up with a couple of hundred of the flying geese blocks after a year or so.

Just before we moved this last time (2021), I found the old metal tin box that I had stored the blocks in.  I realized WHY I had never done anything with them.  They were all different sizes!  A friend who was visiting offered to take them, resize them and make a quilt!  I gleefully and happily handed them over to her! (Note: Jan 2022- she still has not done anything with them either!!)

Ahh, Dial-up.  Way back in the early 90's I worked for a company that sold TV Station signals to the cable companies.  I was the 'techie' person and discovered PRODIGY, an online service that utilized 'bulletin boards'. You younger folks won't have any idea what that was, but was the precursor to the INTERNET (1993) & Facebook that we all know and love (or hate) now.   At that time postage was pretty cheap, and you could stick one or two fat quarters in an envelope and mail it with a first class stamp for about 39 cents!

We had a few more rules, mostly, that it needed to be 'quilt shop quality' but many times it wasn't.  We had a hostess that mostly just kept track of who was participating.

We would download a list of the swappers, and mail out one fat quarter or block  to each person.  That was the start of 'squishies'.  It was always fun to get fat envelopes in the mail throughout the month, only to begin again the next month.

For the past 15 years or so, I have been involved in more than one Block Builder Group in the Houston Area.  This is a group where like minded quilters decide on a block, have very specific guidelines (rules) for what is acceptable to swap.  These can be online or local swaps.  These are my favorite swaps.  For a local group, you are a group of fellow quilters that you know, and you know their skills. We meet once a quarter, swap blocks and have a pot-luck lunch. Online groups are a little more high maintenance. 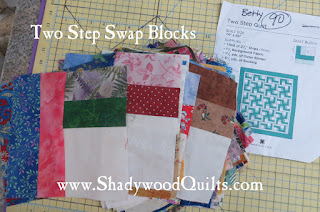 Local quilting groups such as Quilt Bees or Stitch Groups* are great for swapping fabrics (fat quarters) or making blocks.  Our Thursday Night Bee (well duh, we met on Thursday night!!) had 12 members most of the time.  Very convenient for making "Birthday Blocks".  We each had an 'assigned' month that was somewhat close to our birthdays. Basically, we took everyones birthday, and sorted the birthdays.  First one was January, second one February and so on, two of us in November, no one in December.

So here is how it worked.  At the first of the year, you decided what block you wanted everyone else to make for you.  You then put together a kit.  This kit would include the block pattern or theme.  Maybe you wanted  '12" finished sized Christmas Blocks without any Blue'  In this case, the Bee member would provide a brief description of what she wanted.  If blocks were small like a 6" nine patch, you would make two, rather than one larger block.

If you wanted a particular background fabric, you would include enough of that fabric with the block kits that you would distribute to each member.  One year, I included two 10" squares from a Moda Layer cake (and background) in each kit. (see photo above and to the right).

* In Tulsa OK (in the early 1980's), our local small groups in our guild were called 'Zip Stitch' groups.  Our guild had over a hundred members, and the groups were originally created based on zip codes.  The name was later abbreviated to Stitch (or Stitch 'n Bitch) groups.

* In Houston TX, they were referred to as "Bees".

* In The Villages FL, we are "Chapters".

Back to Quilt Block Swaps